Cushing's Disease: What the Patient Needs to Know

Cushing’s disease is a condition of excessive production of the hormone cortisol due to a benign tumor of the pituitary gland. Common symptoms include high blood pressure, high blood sugar, fatigue, and body fat accumulation to the face, neck, and abdomen.

The wide variety of symptoms and gradual changes in appearance often lead to delayed diagnosis. Although the tumor is benign, symptoms will worsen until treatment is initiated. Treatment options include surgery, medications, and radiation therapy. Surgery is often curative, is the first line of treatment, and hormone supplementation may be necessary following the procedure. This disease can become life threatening if left untreated.

What Is Cushing’s Disease?

Cushing’s disease is a condition characterized by an abnormal excess of the stress hormone cortisol due to a benign hormone-producing tumor of the pituitary gland in the brain. This pituitary tumor, also known as a pituitary adenoma, produces excessive adrenocorticotropic hormone (ACTH).

The function of ACTH is to trigger the adrenal glands on the kidneys to produce the stress hormone cortisol. Excessively high ACTH levels leads to an uncontrolled production of cortisol and keeps the body in a constant state of stress. This condition was first described in 1912 by the highly esteemed Dr. Harvey Cushing, who is often considered the founder of modern neurosurgery.

Cortisol production naturally follows a daily cycle or ‘circadian rhythm’. The levels are typically highest in the morning to promote wakefulness and lowest during the night. Cortisol is also produced during situations of acute stress, often known as the “fight or flight” response. During both cases, cortisol has a wide variety of functions that include regulation of blood pressure, mobilization of energy stores, and suppression of the immune system. However, when this response remains chronically active, disruptive symptoms can occur. 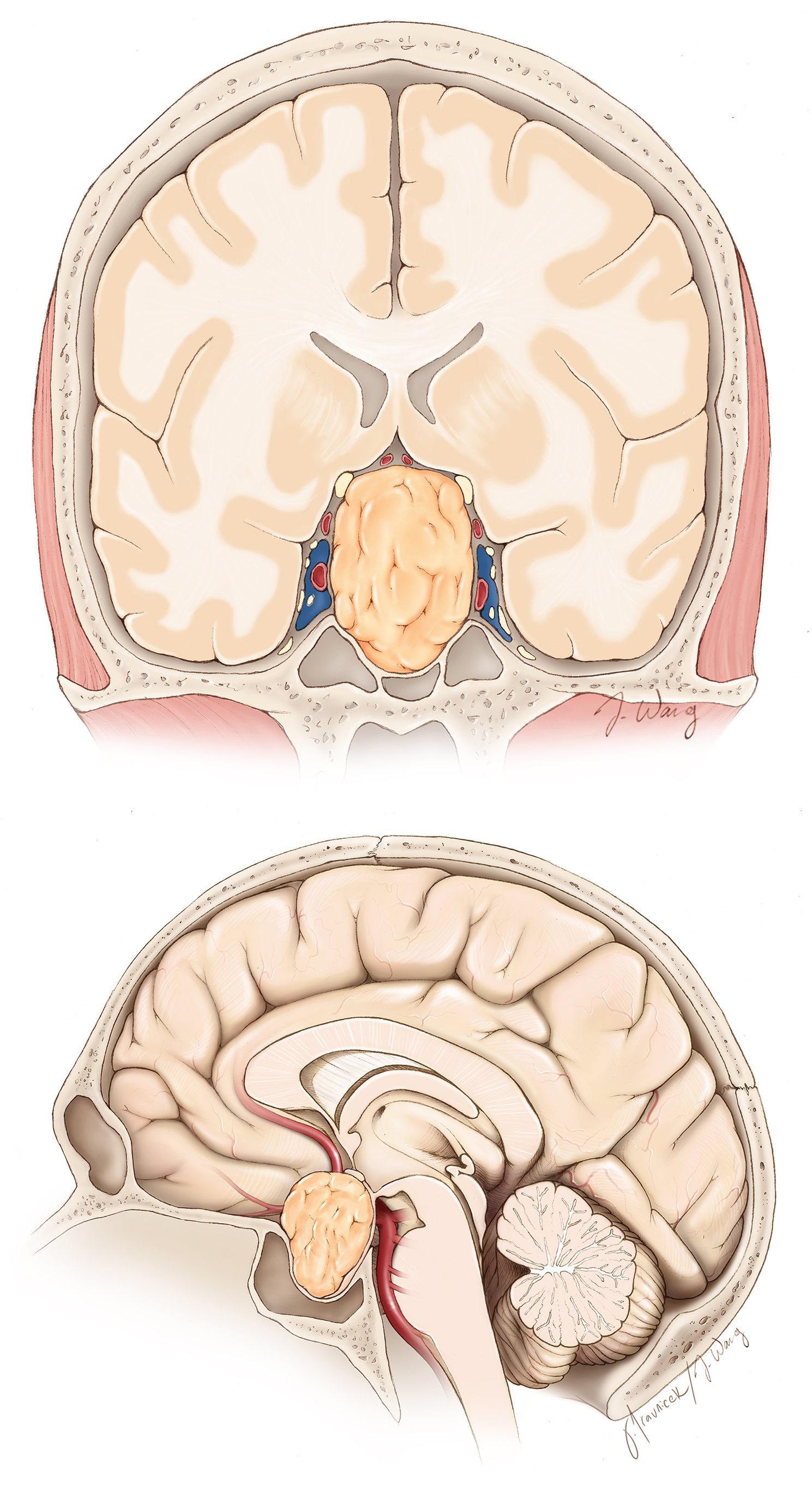 Figure 1. A large pituitary adenoma at the base of the brain is observed compressing the optic nerves and surrounding blood vessels.

Hormones are chemicals that travel in the bloodstream and have effects throughout the body. Therefore, high levels of cortisol in Cushing’s disease often causes a wide variety of symptoms. These symptoms can be subtle and viewed separately, which unfortunately can lead to delayed diagnosis. 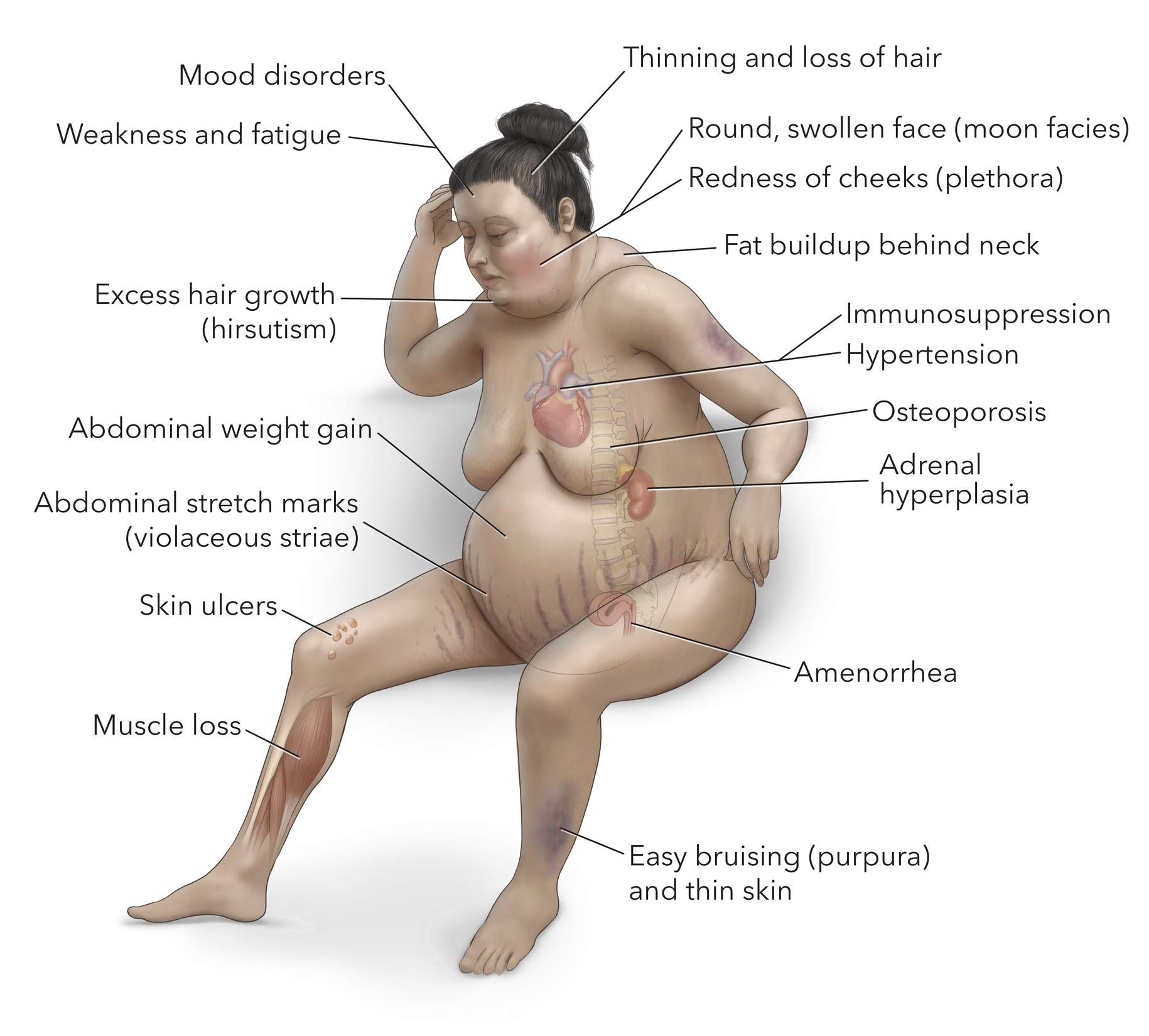 Figure 2. Symptoms of excess cortisol include accumulation of fat behind the neck, abdominal stretch marks, easy bruising, redness of the cheeks, and muscle loss particularly in the arms and legs.

Very large pituitary tumors (macroadenomas) can cause additional symptoms by compressing nearby structures in the head. Due to the proximity of optic nerve fibers, a large pituitary adenoma can cause visual disturbances. Specifically, a loss of peripheral vision (bitemporal hemianopsia) may be noticed. Vision can become blurry, and colors may appear less vivid.

The pituitary gland is responsible for producing many important hormones in addition to ACTH that affect the release of thyroid, growth, and sex hormones. If the pituitary adenoma grows large enough to compress the normal pituitary gland, decreased levels of these other critical hormones can occur and lead to symptoms. For example, a reduction in sex hormones could lead to reduced sexual drive, impotence, and infertility.

Cushing’s syndrome (in contrast to Cushing’s Disease) is a condition of abnormally high cortisol levels in the body from any source. The most common cause is long-term use of corticosteroid medications such as prednisone, hydrocortisone, and dexamethasone. This is seen in patients requiring chronic treatment for severe asthma or rheumatoid arthritis. The second most common cause is an ACTH-secreting pituitary adenoma (Cushing’s disease).

Other causes of high cortisol may include tumors of the adrenal glands that secrete cortisol directly, or ACTH producing tumors elsewhere in the body (ectopic Cushing’s syndrome). Your doctor will conduct tests to rule out these other possibilities during a proper workup for suspected Cushing’s disease. Be prepared to inform your doctor of any current and prior medication use during this evaluation.

Most pituitary tumors occur sporadically without known underlying risk factors or genetic predispositions. Research is being conducted to better understand the development of Cushing’s disease and pituitary adenomas in general.

The diagnosis is initially based upon a review of the patient’s medical history, physical exam, and laboratory test findings. These will demonstrate the signs and symptoms of elevated cortisol levels and prompt further confirmatory testing such as a 24-hour urinary excretion of cortisol test. Many patients find it helpful to compare current and old photographs as bodily changes are often gradual.

Endocrinologists are primarily responsible for the initial work up and diagnosis of Cushing’s disease/syndrome. Accurate diagnosis can be complex and challenging, especially in mild cases.

Once Cushing’s syndrome is confirmed, the physician will begin further workup to determine the source of the elevated cortisol. The diagnosis of Cushing’s disease can initially be challenging due to the daily fluctuations in cortisol levels and often small tumor size (microadenomas). The goal of diagnostic testing will be to confirm the presence of an ACTH-producing pituitary adenoma, while ruling out other possible sources of excessive cortisol using the tests described below.

The initial goal of laboratory testing is to confirm the presence of elevated cortisol using the following tests.

Cushing’s disease is commonly treated with surgery, radiation, medication, or a combination of these therapies. Surgery is often the first line of treatment as it is currently the only curative option. For patients who cannot undergo surgery or in cases where surgery is not successful, medication and radiation therapy can potentially manage the condition.

Endoscopic pituitary surgery is currently the only curative treatment option for ACTH-secreting pituitary adenomas. A minimally invasive surgery can be conducted through the nose using a special instrument with a small camera (endoscope) and the transsphenoidal approach. During the transsphenoidal approach, surgical instruments are passed through the nose and sinuses to reach the pituitary gland at the base of the skull. 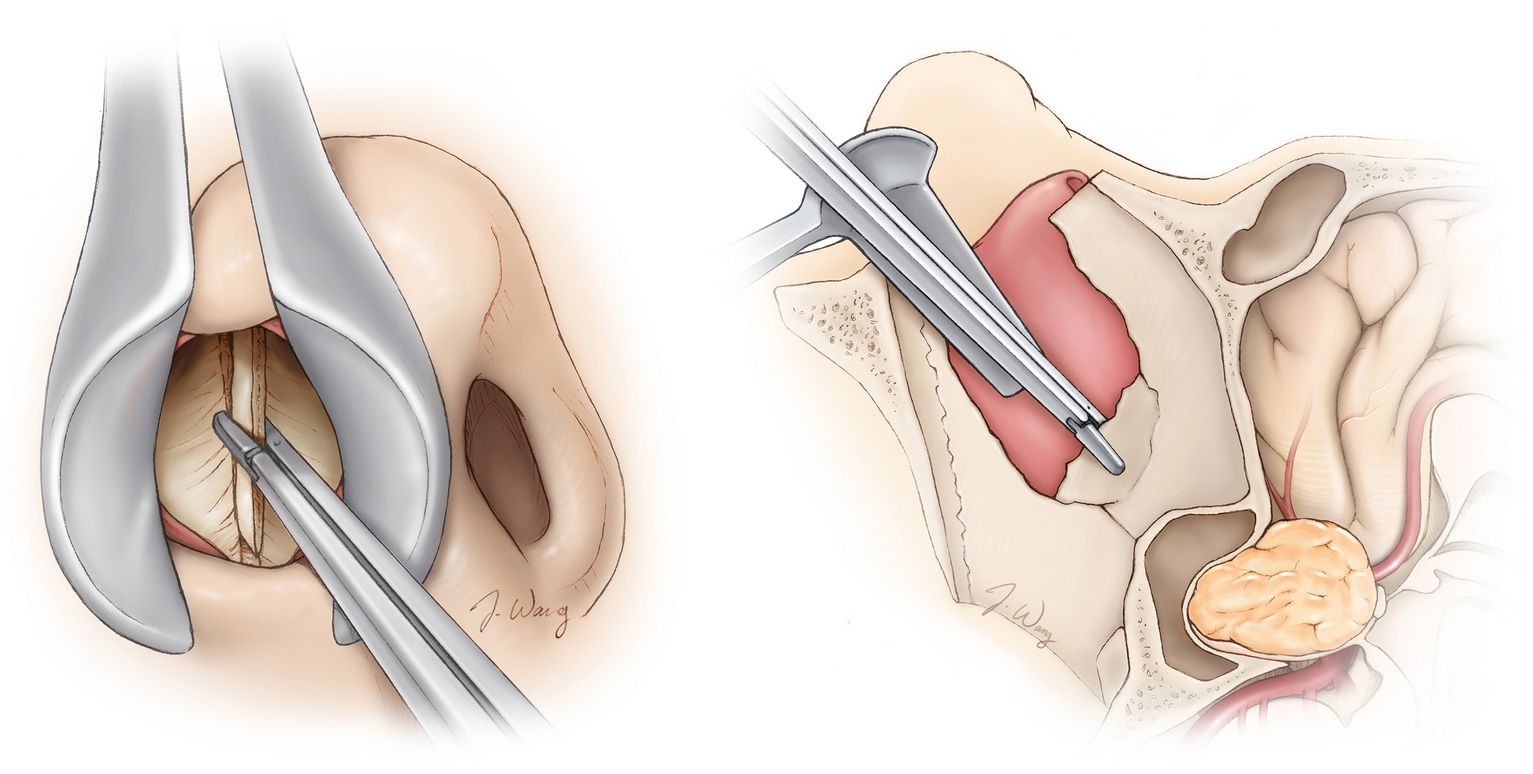 Figure 3. Removal of bone through the nasal passages (left) en route to a tumor at the base of the brain (right).

Complication rates are low but can include cerebrospinal fluid leak, excessive urination and thirst (diabetes insipidus), and hormone deficits. These are often temporary conditions. Most hospital stays are no longer than 3 to 4 days.

Some larger tumors usually cannot be removed in the same way. In such instances, the surgeon might opt for a craniotomy. During this procedure, the surgeon exposes the tumor through the upper portion of the skull. This is a more invasive form of surgery, and postoperative stays are longer, usually between 5 and 6 days.

For patients where surgery is not an option or if surgery has not been successful, the medication pasireotide (Signifor) may be initiated. Pasireotide is a somatostatin hormone analogue that can bind to the ACTH-secreting tumor and inhibit ACTH secretion. Since this medication can cause blood sugar levels to rise (hyperglycemia), patients with diabetes mellitus should be carefully evaluated and have their current diabetic therapies optimized prior to starting the medication.

Traditional external-beam radiation therapy directly delivers a single beam of radiation to the tumor. The procedure is usually performed 5 times per week, for several weeks. The radiation treatments can take several years to bring tumor growth and/or hormone secretion under full control, and the procedure risks damaging normal pituitary function as well as adjacent neural structures.

Stereotactic radiosurgery can deliver higher doses of radiation more accurately by applying precise and multiple beams to target the tumor. It does not require any incision and is done as a single-session outpatient procedure. As with external-beam radiation therapy, it may take years for the full benefits to manifest, but unlike external-beam radiation therapy, surrounding structures are less prone to damage from the radiation treatment. Treatment is usually avoided for tumors near important nerves.

Radiation therapy can be used rarely as an alternative to surgery for cases in which the tumor is inaccessible via traditional routes.

Possible complications of radiation therapy include headaches, seizures, neurologic problems (depending on the area being treated), and difficulties with thinking or decision-making. Permanent injury to healthy tissues caused by radiation (radiation necrosis) is another possible but delayed complication of radiotherapy that results in headaches, memory loss, personality changes, and seizures. This complication is rare but can occur months to years after treatment.

In severe cases, removal of both adrenal glands located at the top of the kidneys may be required if prior therapy options have failed to cure disease or control symptoms. Without these glands, patients will require lifelong hormone replacement.

The recovery outlook for Cushing’s disease depends on the size of the tumor and stage of disease progression. If treatment such as surgery and in the case of small tumors (microadenomas) adequately removes the tumor, patients can expect to return to generally healthy and normal lives. Pituitary surgery can cure or improve symptoms in 80-85% of patients. Stereotactic radiosurgery is similar in effectiveness with remission rates around 50-60%.

Pituitary adenomas may recur so regular follow up with your physician is important to check for new growths. After therapy, the production of other pituitary hormones may be affected and necessitate hormone supplementation.

Adrenocorticotropic Hormone (ACTH)—hormone produced by the pituitary, which causes the adrenal glands to produce cortisol

Benign tumor—tumor that remains in its primary location without spreading

Craniotomy—procedure that removes a piece of bone from the skull to expose the brain; the bone is reattached to its original location immediately after the rest of the surgery