Glossopharyngeal Neuralgia: What the Patient Needs to Know

Glossopharyngeal neuralgia is a facial pain syndrome consisting of recurring attacks of stabbing or electric-like shocks of pain in the ears, base of the tongue, tonsils, and/or beneath the angle of the jaw. Pain episodes can be triggered by actions such as swallowing, yawning, sneezing, or coughing.

In some cases, glossopharyngeal neuralgia is caused by compression of the nerve by structures such as blood vessels or tumors. However, in most cases, no physical cause is found. Treatment options include medications, surgery, controlled nerve destruction (radiofrequency rhizotomy), and radiation. In a majority of correctly diagnosed patients, current treatment options can offer long-term freedom from pain.

The correct diagnosis of glossopharyngeal neuralgia is the most difficult part of the disease and its treatment. No definitive way of diagnosing this disease exists, but a physician who has a clear understanding of the pain pattern can determine if it is the most likely cause of the symptoms.

What Is Glossopharyngeal Neuralgia?

Glossopharyngeal neuralgia is a facial pain syndrome consisting of recurring attacks of sharp pain in the ears, at the base of the tongue, in the tonsils, and/or beneath the angle of the jaw. These areas are supplied by branches of the glossopharyngeal nerve as it exits the brainstem.

Pain episodes can be as short as 1 second or as long as a few minutes and are often triggered by swallowing, talking, coughing, or yawning. In some cases, glossopharyngeal neuralgia is caused by compression of the glossopharyngeal nerve by structures such as blood vessels and tumors. However, in most cases, no physical cause is found.

Patients with glossopharyngeal neuralgia present with recurrent episodes of stabbing or electric-like shocks of pain in the ear, at the base of the tongue, in the tonsils, and/or beneath the angle of the jaw, and the condition occurs more commonly on the left side. These episodes can be triggered by swallowing, particularly cold liquids, and actions such as yawning, sneezing, or coughing. The glossopharyngeal nerve closely neighbors the vagus nerve, which is involved in controlling heart rate and blood pressure. Some patients can lose consciousness or experience seizures or sudden loss of heart function (cardiac arrest) during these attacks.

Glossopharyngeal neuralgia currently does not have a well-defined cause. In some patients, it can occur as a result of compression of the glossopharyngeal nerve by a blood vessel or tumor or other conditions such as multiple sclerosis, Sjogren syndrome, or Eagle syndrome. However, most often, no abnormality is found.

Glossopharyngeal neuralgia is very rare and affects 2 to 7 people per million each year. It mostly affects adults aged 50 years or older and more commonly involves the left side.

Glossopharyngeal neuralgia is primarily diagnosed clinically with a thorough investigation of the patient’s experience during pain episodes. A complete physical examination is also conducted to rule out other possible causes.

Other tests can include attempting to trigger a pain episode by touching the back of the throat with a swab. If that causes pain, then a topical anesthetic is applied, and the physician will repeat throat stimulation. Successful numbing of the pain indicates glossopharyngeal neuralgia. Magnetic resonance imaging (MRI) is often conducted to check for any blood vessels or tumors that are near the nerve. However, imaging results are normal in most cases. 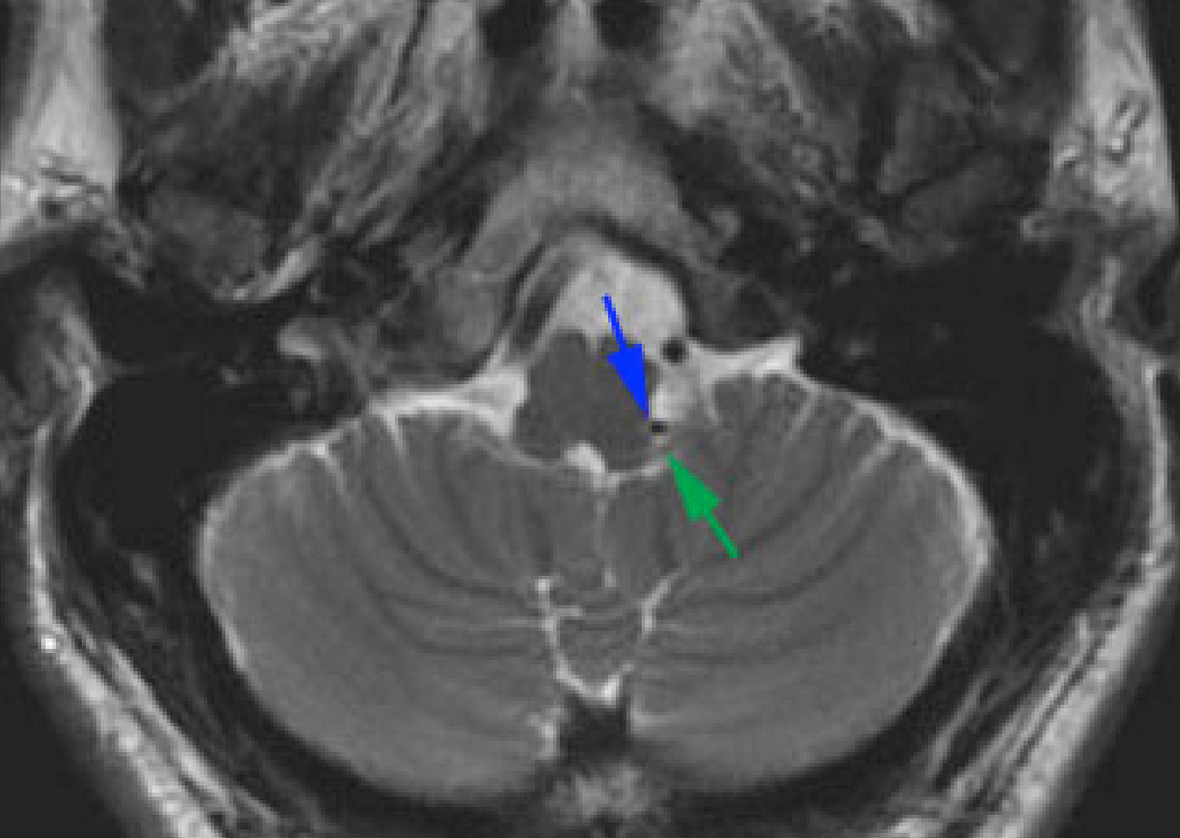 The initial treatment for glossopharyngeal neuralgia is usually an antiepileptic medication such as carbamazepine (Tegretol) or gabapentin (Neurontin) to control the pain. If the pain persists, a dosage increase, an alternative drug, or multiple drugs could be administered. Side effects such as drowsiness, nausea, rash, and blood count abnormalities might occur. Patients are monitored with blood tests to ensure that the drug(s) is at a safe level. Medical therapy is not effective for many patients, but other treatment options can be considered.

In appropriately selected patients, long-term freedom from pain can be achieved with surgery. The main surgical approach is called a microvascular decompression (MVD). This operation involves creating a small coin-sized opening in the skull (craniotomy) behind the ear to expose the nerve as it exits the brainstem (see Figure 2). A cushion such as a sponge or packing material is placed between the compressing structure (for example, a blood vessel) and the nerve to relieve pressure.

If no offending blood vessel is found, the surgeon might cut the glossopharyngeal nerve and the sensory root fibers of the neighboring vagus nerve to prevent pain signals from reaching the brain. After surgery, the patient usually stays in the hospital for 2 to 3 days.

Figure 2. Area of the operation (left) and placement of packing material between the artery and nerve root to decompress the nerve (right).

In this video, Dr. Cohen describes the techniques for surgery to treat glossopharyngeal neuralgia.

For more information about the technical aspects of the surgery and extensive experience of Dr. Cohen, please refer to the chapter on Microvascular Decompression for Glossopharyngeal Neuralgia in the Neurosurgical Atlas.

Percutaneous stereotactic radiofrequency rhizotomy is a minimally invasive procedure that can relieve pain by controlled destruction of the nerve through heat. During this procedure, a needle is inserted through the cheek toward the brain and the glossopharyngeal nerve.

Only light sedation is used because the patient must be awake during several portions of the procedure. After the needle is placed, the patient helps the surgeon by identifying the location of the nerve at which pain occurs when low-level electric stimulation is applied. Once the pain is found, the surgeon places electrodes there, and the patient is given anesthesia; a heating current is passed through the electrode to destroy pain fibers in that area, and the patient is awakened to determine if the pain persists. These steps are repeated until the pain is relieved. After the procedure, the patient can go home on the same day.

Possible complications of radiofrequency rhizotomy include hoarseness, vocal cord paralysis, and difficulty swallowing. As it is difficult to control the destruction of fibers in patients with glossopharyngeal neuralgia, this procedure might be restricted to patients with pain caused by cancer who already have swallowing or vocal cord problems.

Radiation is another option for treating glossopharyngeal neuralgia and is delivered in a targeted beam through radiosurgery. In radiosurgery, hundreds of small, concentrated beams of radiation are aimed at the glossopharyngeal nerve using a radiosurgical device such as the Gamma Knife. The procedure can take up to an hour. The patient is placed in a stereotactic headframe on the day of the procedure to stabilize his or her head and precisely target the glossopharyngeal nerve. Focused beams are aimed at the root of the nerve, which causes injury over the course of the next several weeks. Patients experience pain relief gradually, and medications can be used in the interim.

In a majority of patients who suffer from typical glossopharyngeal neuralgia, freedom from pain can be achieved with the treatment options shown above. However, microvascular decompression is preferred. The effectiveness and side effects vary for each person, so certain treatments might be better options depending on the patient’s other existing medical conditions.