Overview of Natural History of Meningioma

Meningiomas are the most frequent primary tumor of the brain and spinal cord, originating from the membranes around the brain (meninges) and compressing the brain (Figure 1). According to their appearance and behavior, these tumors are classified into one of three grades. Most meningiomas are benign (i.e., Grade I).  These tumors can be incidental findings due to the widespread use of radiographic imaging tests to evaluate other conditions.

Their definitive diagnosis is established with patient history, physical examination, imaging tests, and tumor sampling. Meningiomas’ characteristic imaging pattern is their hallmark identifier. In general, meningiomas are asymptomatic and measure around 3 cm in diameter. However, if symptoms appear, they correspond with tumor size and location as well as their ability to cause local brain swelling. It is not entirely known what causes meningiomas.

Factors that increase their occurrence include age, family history, genetic disorders, and environmental exposures. The knowledge and understanding of the natural history of meningiomas is important to provide treatment and support to patients and their families. Figure 1. A left frontal meningioma originating from the covering of the brain (meninges) and compressing the brain is demonstrated.

To better understand the nature of the tumor, meningiomas are classified according to their cellular features into one of three grades of the established World Health Organization (WHO) classification. Characteristics such as growth rate and the appearance of cells under the microscope guide the grading and provide insight into the possibility of recurrence following surgery. Grade I tumors are most common. In fact, more than 80% of meningiomas are believed to be Grade I tumors. These types of tumors are benign, slow-growing, and carry the lowest likelihood of recurrence following surgery.

Grade II tumors have a faster growth rate and can invade the surrounding structures. Their treatment can be more challenging, with a higher chance of recurrence. Finally, Grade III tumors are aggressive cancerous lesions that grow and spread quickly. Their management is complex and specific.

Meningiomas can have variable sizes depending on their grade and time of diagnosis. Studies have shown that most of them measure around 3 cm when discovered. Their growth rate is around 2-4 mm per year. Importantly, size is not always the determining factor for surgery. Instead, a combination of factors related to the tumor and the patient are considered to determine the treatment course. For instance, if the tumor growth and location affect vital brain structures and/or cranial nerves, the situation may require prompt surgical management.

Several types of meningiomas are curable. They can be treated with surgery, radiation, observation, or a combination of treatments. Small asymptomatic lesions can be observed and maintained under surveillance imaging without invasive management (Figure 2). If surgery is performed, the goal is to extract the tumor completely, preserving adjacent critical structures. Every patient is unique, and treatment is tailored accordingly. The involvement of a multidisciplinary team including neurosurgeons, oncologists, and radiation specialists favors the best possible outcomes. 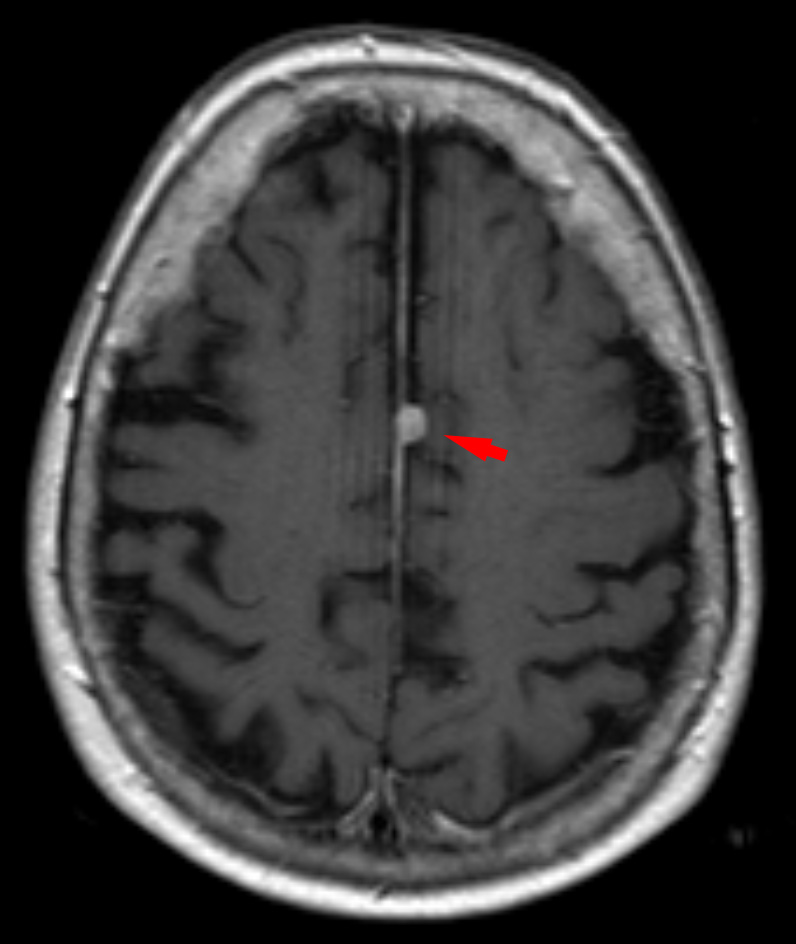 Meningioma diagnosis can be challenging because their growth rate is so slow that a small tumor may not cause any symptoms. If symptoms occur, they can be confused with other conditions or even normal aging. Patients might not experience symptoms until the size of the tumor causes compression of nearby critical brain tissues.

In several cases, meningiomas are discovered incidentally when a radiographic image is performed for an unrelated condition. However, when symptoms occur, they generally reflect the size and location of the mass. The most common symptoms include headaches, nausea, vomiting, seizures, vision change, numbness or weakness, and mental status alteration.

There is no unique symptom or physical finding that points specifically to the presence of a meningioma. Diagnosis is performed by a comprehensive evaluation of the symptoms, physical exam findings, imaging tests, and laboratory results.

Neurologic evaluation can point out the possible location. Lab tests are not used for primary diagnosis. Instead, they provide helpful information about the patient's general health status. Finally, radiographic studies are the hallmark of meningioma diagnosis.

Radiographic studies such as computed tomography (CT) and magnetic resonance imaging (MRI) are the most commonly used imaging tools to diagnose meningiomas. CT scans use a series of x-rays to create images of the brain. They are faster than an MRI (i.e., around 30 minutes or less) and usually are performed as the first imaging test. On the other hand, an MRI uses magnetic forces and radio waves to create images that show greater soft tissue detail. MRIs take longer than CT scans to perform.

However, the detailed images MRIs produce are very useful in the tumor evaluation. In addition, MRI images can guide neurosurgeons when surgery is performed. Notably, in cases where the blood supply to the tumor needs to be evaluated, specific imaging studies such as an angiogram can be performed.

Since MRI scans can be relatively diagnostic for meningiomas, a biopsy is rarely needed. The choice of surgical removal or observation is made based on the patients’ symptoms. If the tumor is deemed symptomatic, resection is completed via a craniotomy. If the tumor is not symptomatic, is small, and not causing any other concerns, follow up imaging in 6 months will monitor the tumor and its growth rate. Some tumors may not need an intervention for years.

Importantly, other conditions can present with symptoms like that of a meningioma. Other kinds of brain tumors, intracranial abscesses and infections, seizures, migraines, and autoimmune disorders may cause similar symptoms. The treatment of these conditions can be different, so a detailed evaluation is needed to determine the diagnosis.

Symptoms of Meningiomas by Location

Although meningiomas are slow-growing tumors, their symptoms can be related to their location and compression of surrounding brain structures. Common general symptoms are headaches, nausea and vomiting. Even small-sized tumors can cause significant symptoms if they affect brain areas that are more sensitive to compression (i.e., optic nerves) or cause brain swelling due to their more invasive nature.

Considering the general principle that different parts of the brain and spinal cord control unique body functions, meningiomas can cause symptoms secondary to the location in which they arise. For example, if a tumor compresses the optic nerves, the patient will experience visual alterations. Of note, symptoms are suggestive but not definitive to an anatomic location.

Here are some of the most common locations of meningiomas and the symptoms they produce. Intraventricular meningiomas occur in the internal cavities of the brain (i.e., ventricles) where cerebrospinal fluid flows. The pressure within this system and the cranium elevates when the tumor obstructs the flow of this fluid. Symptoms include headaches, nausea and vomiting, lethargy, and vision changes.

Convexity meningiomas arise on the surface of the brain. If the motor region is affected, they can produce weakness or paralysis on the opposite side of the lesion. Foramen magnum meningioma affects the largest hole of the skull where the spinal cord enters the cranium at the base of the skull. The space is limited, so compression occurs quickly and causes alterations in balance, strength, sensorium, and cranial nerves.

Interestingly, meningiomas can be grouped, distinguished, and treated according to the anatomic location from which they arise. Neurosurgeons are trained to evaluate the presenting symptoms and determine a treatment plan.

The causes of meningiomas are variable and are related to factors such as age, race, gender, environmental factors (i.e., radiation exposure), and genetic diseases. Meningiomas are uncommon in children and adults less than 20 years of age. However, the risk of their development increases with age, and most meningiomas are found in patients older than 65 years. Non-Hispanic African American patients are at an increased risk of meningioma development compared to other races.

Some factors have shown a variable association with meningioma development. First, being a female slightly increases the risk of development. Studies have found that meningioma incidence is higher in post-pubertal women than in men. Secondly, hormones have also demonstrated a relationship. Some meningiomas change size during the menstrual cycle and pregnancy. Furthermore, some meningiomas own cell receptors that are affected by hormones.

Factors that increase the risk of development are family history, genetic disorders, and ionizing radiation. Patients with a family history of meningiomas have an increased risk of tumor appearance. Moreover, specific genetic disorders are associated with meningioma development. Importantly, ionizing radiation is the principal environmental risk factor associated with meningioma development. This association was found valid in several scientific studies where people with a history of high-dose exposure to ionizing radiation had an increased incidence of meningiomas. Although some other causal factors have been identified, further research is needed.

In most cases, meningiomas are benign and asymptomatic. They arise from the meningeal layers that cover and protect the brain and spinal cord. An imaging study such as a head CT or an MRI is used to diagnose meningiomas. Signs and symptoms depend on the tumor size and location. Some of them do not produce symptoms. Therefore, they are discovered incidentally in the investigation of a different condition.

Common symptoms include headache, dizziness, nausea and vomiting, and visual impairments. The specific causes of meningiomas have not been identified. However, there are certain known risk factors. Therefore, a multidisciplinary team management approach is suggested to enhance patient outcomes.