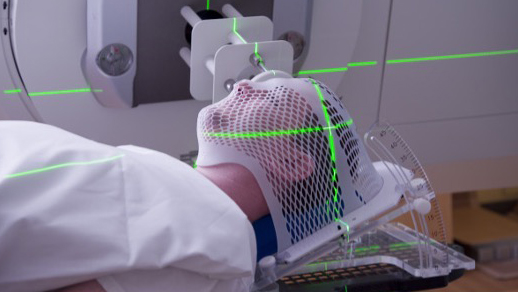 Facing a brain tumor can be a challenging experience for patients and caregivers. However, receiving a diagnosis of a meningioma, which is a particular type of brain tumor, leaves a lot of room for optimism. And, of course, having information to guide you through treatment options makes all the difference.

Meningiomas are the most common type of primary intracranial tumor, accounting for approximately 38% of primary brain tumors diagnosed in the United States, with most occurring as World Health Organization (WHO) Grade I benign tumors. They arise from the meninges, the membranes surrounding the brain and spinal cord. While meningiomas are commonly benign slow-growing tumors, they may compress adjacent structures in the brain and spinal cord as they grow.

The most common treatment option available for meningioma is surgery to remove it. Do all meningiomas require surgery? Fortunately, the answer is no. Observation is the most common treatment strategy since most of these tumors are found incidentally and are asymptomatic. Radiation therapy is another option for primary treatment of small meningiomas or recurrences after surgery. It is also used as an adjuvant therapy for unresectable portions of a meningioma that were left behind after surgery to ensure remnant tissue does not continue to grow.

Here is a guide to understanding how radiation therapy is used to treat meningiomas, including how effective it is and what to reasonably expect.

During radiation therapy, high-intensity beams of radiation are directed at a tumor to damage the DNA within its abnormal cells. When this DNA is damaged, the cells cannot continue to grow or divide. Because cancer cells tend to divide rapidly and uncontrollably, radiation therapy is more likely to impact the tumor cells. In this way, it can selectively affect tumor cells and effectively decrease their division and prevent their growth.

How Radiation Therapy Is Used

Radiation therapy can be applied to treat a meningioma in several ways.

Both methods of radiation therapy are viable as a primary treatment or an adjunct to surgery for removing a meningioma. Stereotactic radiosurgery is particularly effective at treating meningiomas in areas deemed too high-risk or inaccessible for traditional surgery, such as the base of the skull or parts that are incredibly close to critical sensitive structures.

What to Expect From Radiation Therapy

Preparation for undergoing radiation therapy varies by location and provider, but it generally starts by meeting with your oncologist or radiation oncologist. Depending on your location or provider, they may perform a physical exam, discuss your medical records, and go over any recommended tests with you. They will also answer any questions you may have about the treatment.

You may also be asked to sign an informed consent form following this initial consultation. Doing so documents that you permitted the medical team to perform radiation therapy, informed them of your medical history, accepted any risks from the treatment, and acknowledged that the treatment is not guaranteed to secure the intended results.

Often, the next step is to go through a simulated therapy session. During this session, you are not given any radiation. Instead, it is a practice run so the doctors can position you as they would during treatment, then use imaging technology to learn where to place the radiation and the location of vital structures to avoid. You may also receive tiny marks or tattoos in the area of the meningioma to mark precisely where to aim the radiation.

What to Expect During Radiation Therapy

The doctor will fit you with a wearable device to prevent your head from moving during the procedure. This is important to ensure that the radiation does not go to areas other than your meningioma. The radiation does not burn, sting, or hurt when it enters your body, and treatment is conducted similarly to an X-ray. You will experience a clicking or buzzing sound from the machine.

The amount of time the treatment takes and your treatment schedule depends on the type of radiation therapy you are receiving, but sessions typically last between 15 and 30 minutes. You will be allowed to communicate with your oncologist via an intercom to let them know how you're feeling and whether you are experiencing any discomfort or nausea.

Side Effects of Radiation Therapy

Though the delivery methods may vary, the effects of radiation therapy generally are the same. Each method may use protons, photons, and/or electrons to damage the DNA in targeted cells while avoiding surrounding tissue as much as possible. However, even with the most precise procedures, there is a risk of healthy cells being affected by the radiation, which can cause side effects such as:

The manifestation of side effects is different from person-to-person. For some, it is even possible to continue going about their normal activities right after a treatment session. However, the severity of side effects may also increase as you continue receiving treatment. Be sure to discuss any new symptoms with your doctor.

If there is damage to healthy cells during radiation therapy, they typically recover within a few months after treatment. However, in rare cases, lasting damage is done to the cells. Additionally, you may experience late side effects, which might not manifest until months or even years after radiation therapy is over.

Can a Meningioma Disappear on Its Own?

The prognosis for a meningioma is highly favorable because it is typically benign and slow-growing. The current survival rate for adults between the ages of 20 and 44 with a benign meningioma is 90%. In fact, not all meningiomas need to be removed right away.

However, meningiomas will not simply go away on their own. Meningiomas have the potential to grow and eventually press against your spinal cord or your brain, causing several adverse effects.

Will a Meningioma Come Back After Treatment?

Because meningiomas are usually benign, they can be treated by removing them through surgery or placing them in remission via radiation therapy. However, after undergoing successful treatment, your doctor may ask you to return for regular screenings and checkups every 6-12 months. This is because while the majority of meningiomas can be treated, they have the potential to come back.

The recurrence of a meningioma depends on its WHO Grade, whether it is benign or malignant, environmental factors, the patient's health, whether treatment entirely removed the meningioma, and genetic predisposition. Fortunately, it is rare for an entirely surgically removed meningioma to come back. According to one study, among 120 patients who underwent treatment for a meningioma that resulted in total removal, the recurrence rate was 7.5% after ten years and 9.3% after 20 years.

It is possible to recover fully from a meningioma diagnosis with appropriate treatment. While patients who have undergone treatment do experience a small risk of recurrence, regular vigilance with screenings and imaging will allow doctors to take action to ensure that the meningioma does not come back in full.

Finally, while surgery removes a meningioma, radiation therapy does not remove a meningioma (may slightly shrink the tumor) but decreases the risk of the growth of the meningioma that is currently present.