Stereotactic Brain Biopsy: What the Patient Needs to Know

A brain biopsy is a procedure to obtain a tissue specimen from the brain for further microscopic analysis, characterization, and diagnosis. If the biopsy specimen is a tumor, certain microscopic patterns may be used to discern the type of tumor and determine if the tumor is benign or malignant.

The biopsy result provides useful information to guide treatment. This minimally invasive procedure typically takes less than an hour and patients often return to their daily routine relatively soon after the operation. The biopsy results and its implications will be discussed at the next visit with the surgeon or oncologist.

What Is a Stereotactic Brain Biopsy?

A brain biopsy is a procedure where a small piece of an abnormal brain lesion is obtained for further microscopic analysis. This procedure may be conducted to determine the exact diagnosis of an unidentified mass found on imaging. If the biopsy specimen is a tumor, certain microscopic patterns may be used to discern the type of tumor and determine if a tumor is benign or malignant. The biopsy result provides useful information to guide treatment.

In a stereotactic brain biopsy, the procedure is performed with a stereotactic device that uses a coordinate-based navigation system equipped with a patient’s brain images (MRI, CT) to precisely guide the placement of surgical instruments (biopsy needle). Stereotaxis can either be “framed” (requiring the placement of a frame around the patient’s head) or “frameless” depending on the surgeon’s preference, lesion size, and lesion location.

There are two types of brain biopsies: open and minimally invasive. A stereotactic brain biopsy is minimally invasive and involves a small scalp incision, the creation of a dime-sized opening in the skull bone (burr hole), and insertion of a needle to obtain a tissue sample. Stereotactic brain biopsy is typically used for lesions that are deeper in the brain, hard to reach, and/or near critical structures. They can also be performed when a more invasive procedure is deemed too dangerous for the patient. 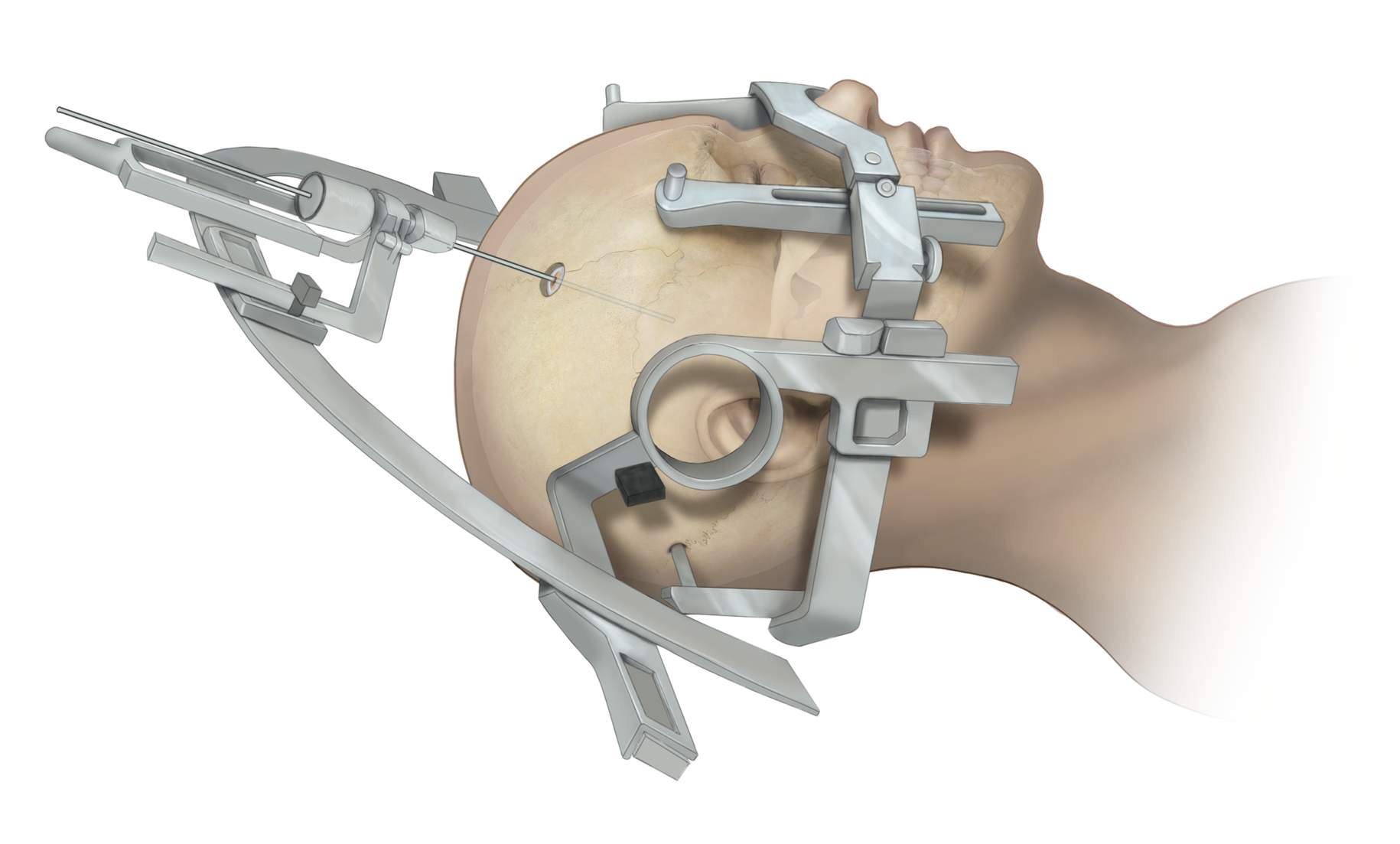 In frameless stereotaxis, the CT or MRI is taken the day before or on the day of surgery. In the operating room, natural face landmarks (ie bridge of the nose) and other markers (fiducials which are placed on the patient’s head) act as reference landmarks. These fiducials often appear as small doughnut-shaped stickers that are simply placed on the scalp or forehead. An algorithm registers the patient’s surface coordinates to corresponding image points on the CT or MRI scan. Once registration is complete, movement of the surgical instrument in relation to the CT or MRI scan is displayed in real time on a computer screen.

Please note that based on the results of the biopsy, a resection procedure may be undertaken later.

Who Performs a Stereotactic Brain Biopsy?

A stereotactic brain biopsy is performed by a neurosurgeon. The biopsy specimen is sent to a physician called a pathologist that specializes in the examination of body tissues. It may take a few days for the biopsy results to become available.

What Happens Before a Stereotactic Brain Biopsy?

Before a stereotactic brain biopsy, the surgeon will explain what the procedure will entail, its risks and its benefits. Consent forms and other paperwork will be filled out to inform the surgeon of relevant medical history such as allergies, other medications the patient is taking, reactions to anesthesia, and any previous surgeries.

One week before surgery, non-steroidal anti-inflammatory (NSAID) medications such as ibuprofen (for example, Advil, Motrin), naproxen (for example, Aleve), and other prescribed NSAIDs, as well as blood thinners such as warfarin (for example, Jantoven, Coumadin), acetylsalicylic acid (aspirin), and clopidogrel (Plavix) should be stopped to decrease the risk of bleeding. This is not an all-inclusive list. Inform your surgeon of all medications and supplements you are taking and follow their recommendations.

Several days before surgery, a physical exam, blood tests, electrocardiogram, chest X-rays and other tests may be performed to ensure that your body can safely handle the anesthetic and surgery, and you are properly prepared for. A baseline neurological exam is conducted and repeated after surgery to check for any neurological changes that may have occurred during the operation.

What Happens During a Stereotactic Brain Biopsy?

While lying on the operating table, the patient will be given anesthesia. The patient’s head will be placed in a skull fixation device that attaches to the table to keep the head from moving during the procedure.

Once in place, the incision will be positioned at the coordinates specified by the stereotactic equipment. In the case of a frameless stereotactic biopsy, markers will be placed on the patient’s scalp and/or forehead to register the patient’s surface coordinates to corresponding image points on the CT or MRI scan. When registration is complete, the needle can be moved and tracked on the computer screen in real time.

A small portion of the patient’s hair will be shaved at the incision site. The scalp is incised to access the bony part of the skull. The surgeon will create a small hole in the skull about the size of a dime (burr hole) to access the brain.

Based on the frame coordinates or with stereotactic guidance, the surgeon will carefully insert the biopsy needle through the burr hole. The needle depth, angle, and trajectory are carefully monitored such that the tip arrives precisely at the location of the lesion with minimal disturbance of normal brain. The surgeon will then obtain a tissue sample.

While the patient is still asleep, the tissue sample will be sent to the pathologist or neuropathologist immediately for an initial evaluation to ensure that the tissue is usable. If the tissue sample is confirmed as abnormal and therefore diagnostic, the surgeon will obtain a few additional samples to send to pathology.

Once the sample has been removed, a small metal plate will be placed on the skull with screws to cover the burr hole and protect the brain. The skin will then be closed with staples or stitches. Bandages placed over the incision may be removed after a day or two.

What Happens After a Stereotactic Brain Biopsy?

Immediately after a stereotactic biopsy, you are taken to a recovery room where you are monitored as the anesthesia wears off. You may feel discomfort at the site of the incision. The biopsy specimens are sent to pathology for definitive evaluation. This process can take up to 5-7 days

Once awake, you are taken to the intensive care unit (ICU) for further monitoring and pain control. Medications may be given to reduce brain swelling. Frequent neurologic exams are conducted. The medical staff may examine your pupils with a flashlight and ask simple questions to check for signs of neurological change.

Generally, this procedure requires an overnight hospital stay. However, the total hospital stay is variable and depends on the underlying medical condition. Some patients will also have problems associated with their underlying preoperative disease and additional monitoring may be necessary.

A possible complication that can occur during stereotactic brain biopsy is bleeding in the lesion caused by the biopsy needle. Bleeding can cause a wide spectrum of symptoms spanning from mild headache to seizure, or coma. The risk of bleeding is approximately 5% and the risk of mortality is 1%.

Stereotactic brain biopsies are minimally invasive and have fewer complications than more complex surgeries that require resection of the tumor on the brain. In most cases, patients can return to normal activity within a week. At the next visit or once available, the biopsy results and its implications will be discussed.