Glioma: What the Patient Needs to Know

A glioma is a form of tumor originating from the glia, the cells that surround and support the neurons of the central nervous system (CNS). Gliomas may cause headaches, seizures, and changes in personality or cognition. Treatment options include surgery, radiation, and/or chemotherapy.

Depending on the type, grade, size, and location of the tumor, the recovery outlook for each patient varies. High-grade gliomas such as glioblastoma are the most difficult to treat and are considered a form of brain cancer, whereas pilocytic astrocytomas are relatively benign and result in the best prognosis.

What Is a Glioma?

A glioma is a form of tumor that originates from the glia, the cells that surround and support the neurons of the CNS. These tumors start in the brain or spinal cord (a primary brain tumor), and while capable of spreading within the CNS, they are usually confined to the brain. 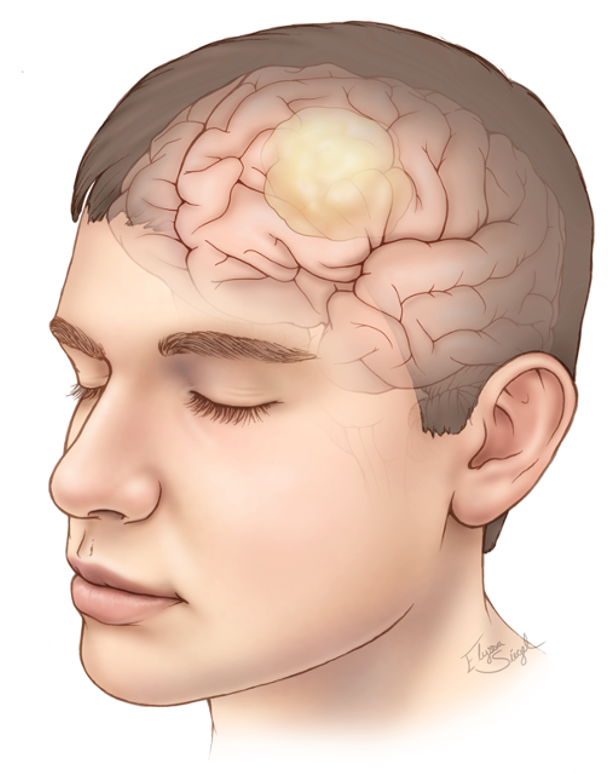 Figure 1. Illustration of a left frontal glioma. This tumor type originates within the brain.

How Are Gliomas Classified?

Gliomas can be either static/slow-growing (relatively benign) or fast-growing (malignant, cancerous). Malignant tumors are classified by the World Health Organization on a 4-point scale according to how aggressive (fast-growing, cancerous) they are; grade I tumors are the least malignant and are usually associated with long-term survival, whereas grade IV tumors are made up of rapidly reproducing and invasive cells and significantly shorten survival.

Low-grade tumors (especially grade II) can mature to higher, more dangerous grades given time. Along with identifying the grade of tumor malignancy (aggressiveness), gliomas are also classified according to the type of cells from which they originate.

Mixed gliomas are tumors composed of a variety of glial cell types in high proportions, including astrocytes and/or oligodendrocytes. Other forms of glioma can contain more than one cell type, but in general, those tumors are dominated by a single class of glial cell.

Like many other brain tumors, symptoms of a glioma are typically caused by increasing pressure on or irritation of the surrounding normal brain. An enlargement of the head is not uncommon in younger children; increased pressure can push outward on the developing skull.

The type and severity of symptoms in each patient vary depending on tumor size and the area of the brain affected by the tumor.

Gliomas develop as a result of the accumulation of mutations in certain genes, leading to abnormal and uncontrolled growth. However, the underlying cause is unknown. Studies report increased risk with exposure to ionizing radiation and decreased risk with a history of allergies or atopic diseases (for example, eczema, allergic asthma).

Gliomas represent approximately 25% of all primary brain and other CNS tumors and 81% of malignant tumors. Glioblastoma is the most common subtype (58%). Glioblastomas have the highest incidence rate among malignant brain and CNS tumors, occurring in 3.23 individuals per 100,000 population. Although gliomas generally tend to affect older individuals, some glioma subtypes, such as pilocytic astrocytoma, occur more commonly in children.

Gliomas are diagnosed by magnetic resonance imaging (MRI) with and without contrast. MRI helps to determine the extent of a tumor and the presence of multiple lesions. The pattern of contrast enhancement can help the physician to decide if a glioma is more likely than other possible conditions. A biopsy might be performed to determine the specific type of tumor. 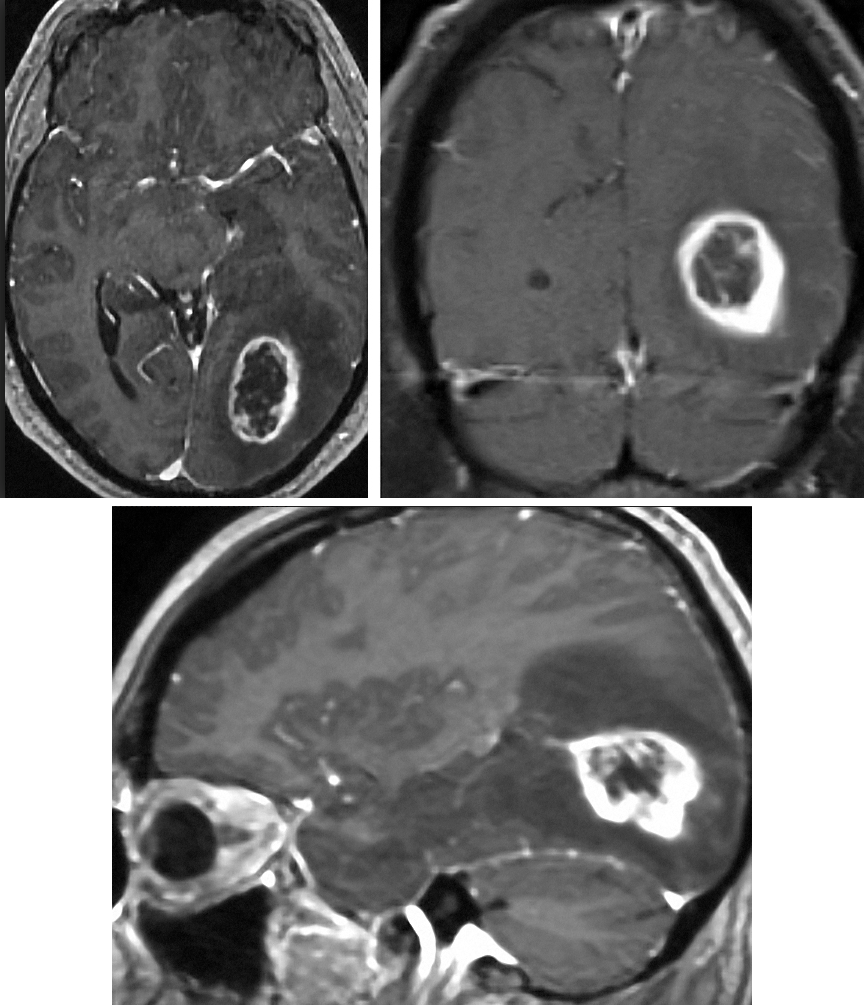 In the biopsy procedure, a small amount of brain tumor tissue is removed and examined under the microscope. The biopsy sample can be obtained during the surgical procedure or as a separate procedure called a needle biopsy, in which a small hole is drilled

The treatment for gliomas depends on the tumor type, size, location, and grade. Surgery is usually the initial course of treatment. Radiation and chemotherapy are also used after surgery, especially in the case of high-grade gliomas.

For cases in which the tumor is relatively benign, small, and/or located in a high-risk area where surgery might cause loss of function, observation might be considered.

Surgery is usually the first course of action, with the surgeon removing as much of the tumor as possible while attempting to avoid damage to the adjacent normal brain tissue. For low-grade gliomas, surgery might be the only necessary course of action because these forms of tumor are often less invasive. Radiation might be used in certain select cases.

For aggressive glioma types such as glioblastoma, the diffuse nature of the cancer and its ability to infiltrate surrounding brain tissues make surgery less effective and total removal very unlikely. In such cases, radiation and chemotherapy may be used before and/or after surgery. Careful monitoring of the patient helps to ensure quick action in the case of tumor recurrence or growth. 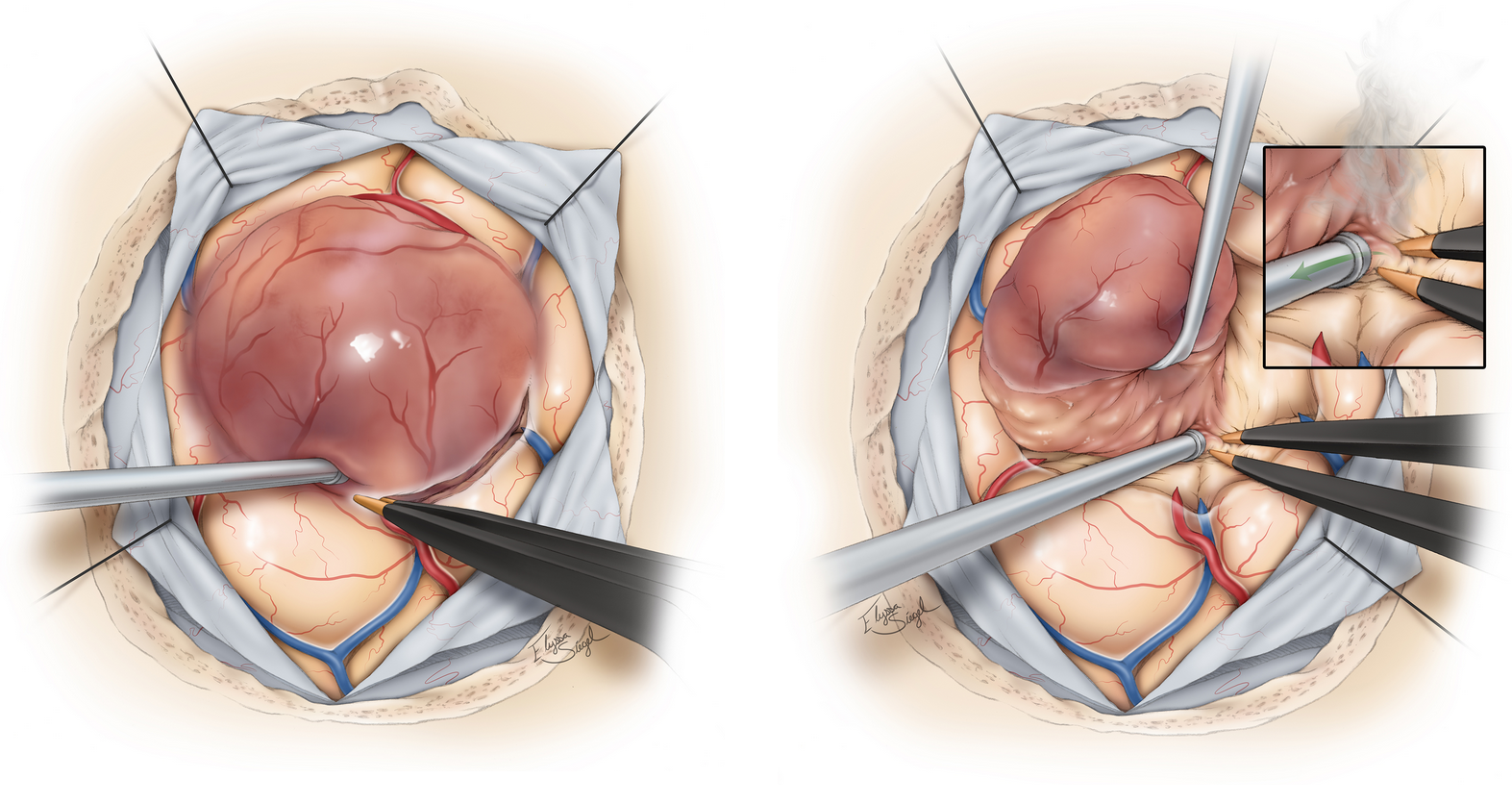 Figure 3. Surgical removal of a high-grade glioma. The tumor is carefully dissected from the surrounding tissues.

Surgery involves stabilizing the patient’s head with a skull clamp, performing a craniotomy, making a cut through the outermost layer of the meninges (dura), and then carefully removing the tumor from the brain. The exact surgical approach depends on the location and size of the tumor.

Complications of surgery can include new neurological deficits, especially if the tumor is located near critical areas in the brain. General complications include brain swelling (edema), CSF leak, bleeding, and infection.

Radiation usually follows surgery, especially for high-grade gliomas. There are multiple ways to deliver this treatment; fractionated radiotherapy is the most common option. More modern techniques such as intensity-modulated radiation therapy may be used.

The patients who undergo fractionated radiotherapy receive smaller doses of radiation over several visits. Each visit takes only 5 to 15 minutes, and the patient can go about his or her business before and after the visit.

In intensity-modulated radiation therapy, the tumor is outlined in 3D, and multiple beams of radiation are aimed at the tumor. The radiation beam is divided into a grid-like pattern such that a single big beam is separated into smaller “beamlets.” Special software then calculates the correct radiation amounts to deliver to the tumor while sparing healthy tissues.

It is important to note that radiation therapy does not remove the tumor. It can, in some cases, cause the tumor to shrink. The main goal of radiation is to stop the tumor from growing. As a result, the patient must return for MRI scans on a regular basis to check for any new growth.

Possible complications of radiation therapy include headaches, seizures, neurological problems (depending on the area being treated), and difficulties with thinking or decision-making. Permanent injury of healthy tissues caused by radiation (radiation necrosis) is another possible but delayed complication of radiotherapy that results in headaches, memory loss, personality changes, and seizures. This complication is rare but can occur months to years after treatment.

Chemotherapy uses drugs to kill the tumor and is often used in addition to radiation and surgery for high-grade gliomas. Chemotherapeutic agents such as temozolomide (Temodar) and bevacizumab (Avastin) have shown good promise in decreasing the progression rate of glioblastomas. Temodar is taken as a pill and can sensitize the tumor to radiation. Avastin may be used for recurrent tumors and works by blocking the formation of new blood vessels that nourish the tumor.

Other treatments being tested include:

These treatments are still experimental and not in widescale use.

The outlook for gliomas is highly variable and depends on the tumor grade, size, and location. Factors such as the patient’s age and overall mental and functional status and the extent of tumor removal through surgery are often useful indicators of prognosis.

Dura—outermost layer of the meninges

Meninges—outer membranous covering of the brain and spinal cord